Used for just a few minutes, but with an almost eternal lifetime – single-use plastic has become one of the biggest plagues on our planet. Currently, around 300 million tonnes of plastic are produced globally per year, and around half of it is designed to be used only once.

Straws, bottles, bags, and plastic food containers are so rooted in our daily lives that it is often difficult to avoid them. Single-use plastic is unfortunately an integral part of our daily lives.

a brief history of plastic

The era of modern plastics is just over a century old, having been born in 1909 when Leo Baekeland, a Belgian chemist, invented bakelite, the 1st synthetic plastic that was not derived from plants or animals, but from fossil fuels. Light, resistant, and durable, bakelite could be molded into almost infinite shapes and it was this vast potential that led to the rapid expansion of its use and manufacture. It was also at this time that disposable plastic appeared, which, according to the American legislation at the time, had to replace reusable tableware in trains, to prevent the spread of tuberculosis.

The 30's saw the 1st polymer synthesized in laboratory, polyethylene (used nowadays to manufacture plastic bags, for example), acrylic (plexiglass) and nylon, which introduced plastic into the fashion industry.

Between the two World Wars, benzene was the most used raw material to produce polymers, extracted and refined almost exclusively from coal. But it is also in this period that the plastic industry slowly begins its migration towards dependence on oil as a raw material. During World War II, the scarcity of natural resources led to an impressive number of chemical and synthetic innovations very important to the military victory. It was from nylon, for example, that parachutes, ropes, helmet linings, among other items were manufactured.

After World War II, plastic manufacturers then dedicated themselves to produce consumer goods on a large scale, modifying the moulds previously used for War products. Synthetics production has increased exponentially and demand for coal and benzene grown like never before, leaving suppliers powerless to keep up with it. 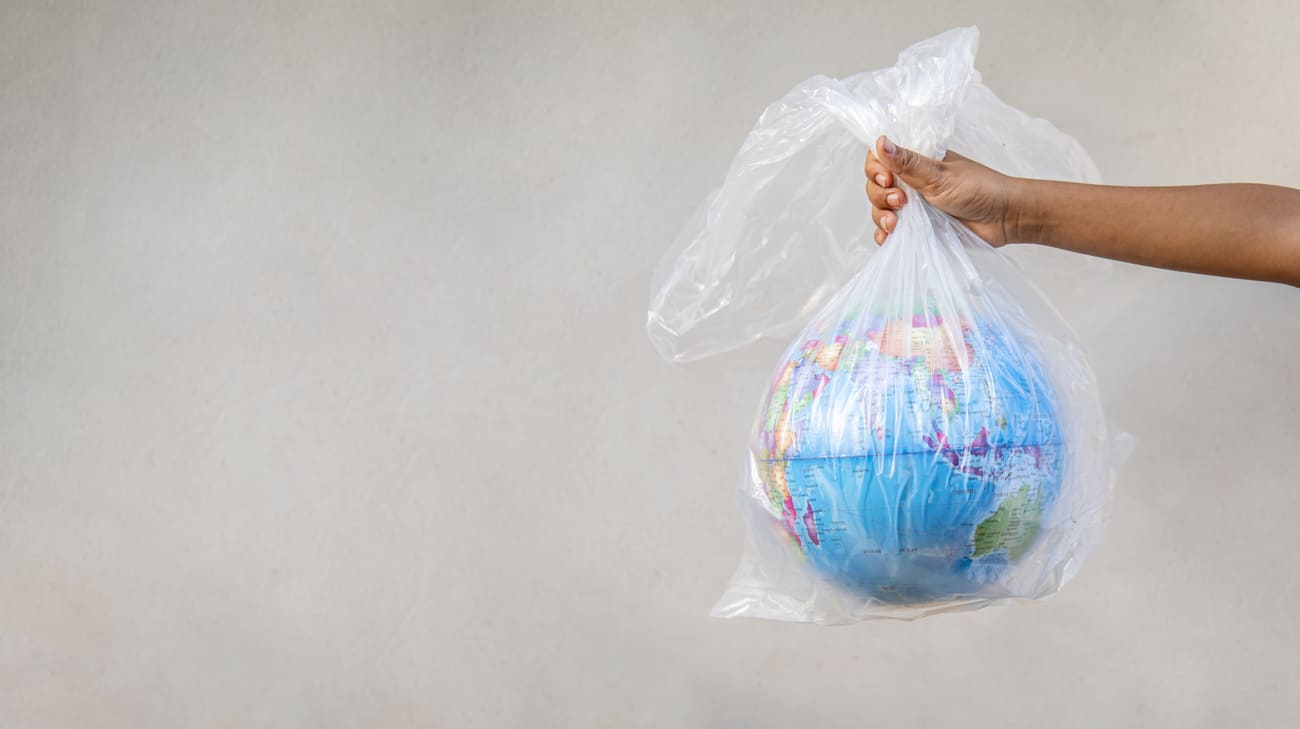 In the 1950s the US government decided to intervene in this matter by providing generous subsidies to companies like Standard Oil so more petroleum-based benzene plants could be built. It was at this time that polyester and polypropylene emerged, for example, as well as the famous Tupperware meetings that subtly helped to introduce plastic into everyday life. At that time, plastic production grew by more than 15%, almost four times that of steel, and in 1960 plastic was one of the largest industries in the world.

Between 1960 and 1980, plastic occupied art and aesthetics, being one of the protagonists of the modernist movement at a global level. The space race between the US and the Soviet Union was made possible thanks to its lightness, strength, and durability. Petroleum-based plastic production lines provided an inexhaustible supply of items essential to everyday life ranging from furniture to toys, clothing packaging and much, much more.

The first disposable polyethylene terephthalate (PET) soft drink bottle was introduced to the market in 1975 and illustrated the irrational waste of the mass production system. Now omnipresent, the PET bottle facilitated the industry's shift from reusable glass to disposable containers.

It was in the 60s that plastic waste was observed in the oceans for the first time and, in the 70s, the emerging environmental movement began to raise awareness of the toxicity and discard of synthetic products, which, in their vast majority, were thought to be disposable. In the 1980s, the reputation of disposable plastic began to be questioned due to its durability and aggressive invasion of the environment. The “Reduce – Reuse – Recycle” campaigns were born, and the plastic industry offered the recycling solution for the 1st time, encouraging the collection and processing of plastic in waste treatment systems. A solution that has proven to have very poor results, as not all types of plastic can be recycled. In 1988, triangular recycling symbols were introduced, related to the quality of plastics, with the consumer being assured that he could continue to buy and dispose plastic, provided that after using it, he placed it in the designated recycling locations.

All these initiatives, we know today, were essentially misleading. There was not then (and does not currently exist) sufficient infrastructure to recycle all or most of the plastic consumed and, although plastic waste was thought to be being recycled, most of it was being burned, sent to landfills, or to poor countries that ended up dumping it into the oceans. Exactly as it continues to be done now, in the 21st century.

In the 1990s, plastic came to be used in almost all types of industries, such as the automobile, health and food industries and several studies indicate that it was at this time that there was an exponential increase in plastic waste in the oceans of our planet.

Although important initiatives and technology continue to emerge to replace, stop and recycle plastic, we continue to live, in the 21st century, dominated by this product and by the dependence on its vital raw material, oil.

Single-use plastic is a clear example of the problems caused by our culture of consumption and disposal. Instead of investing in quality and durable products, we are pushed towards a prioritization of convenience, of what is easier and cheaper, without considering the durability of the products and their long-term impacts. It is this culture that makes us accumulate waste on an immense scale and that has brought us to the current dramatic environmental situation.

Plastic waste generated in cities is only the 1st level of the source of waste that enters waterways and oceans around the world every day, where an impressive 8 million tons of waste arrive every year. Most are single-use plastics, coming from countries that lack infrastructure for waste treatment and recycling, particularly in Asia and Africa. Interestingly, it is to some of these countries, lacking infrastructure and means, that the United States and some member countries of the European Union send their plastic waste to be treated or recycled.

There are coastal communities in Southwest Asia literally buried under thousands of tons of plastic. And it's not just the beaches there that are destroyed… when plastic waste is incinerated, toxic fumes quickly become a health hazard for residents. This is one of the most serious consequences of the environmental crisis: its worst effects are pushed to communities that have the least resources to fight them.

It is, however, wildlife in their natural habitat that has to bear the brunt of this influx of garbage, with marine animals being the most harassed. 90% of seabirds found dead had plastic in their entrails and 100% of sea turtles did too. As is well known, scientists estimate that by 2050 there will be more plastic in the oceans than fish.

Plastic production contributes to greenhouse gas emissions at every point in its life cycle. The process of drilling the earth to extract its raw materials, oil and gas, leads to methane leaks and burns that are often combined with the destruction of forests. Refineries where crude oil is transformed into plastic are one of the industries that releases the most greenhouse gases.

It is important and urgent to rid our planet of the impacts caused by plastic waste. In order to move towards a more sustainable future, we must be aware, at all times, of our consumption patterns and to be flexible enough to change them if necessary. Using less plastic, opting for services where it does not exist, reusing or taking advantage of alternatives already on the market are effective ways to stop plastic waste and the serious consequences related to its production and consumption. It is also important that industry and governments continue to invest in technology that will make it possible to produce new materials that replace plastic and recycle it more efficiently. Plastic will continue to exist depending on the existence and availability of sustainable alternatives.

Plastic burdens waste management systems, the oceans and the most vulnerable communities around the world. Fortunately, a wave of bans on the consumption of single-use plastics is beginning to spread to all countries. Straws, bags, stirrers, and take-away packaging, for example, have been among the first products to be banned worldwide. On November 1, 2021, the European Union launched Directive (EU) 2019/904 (link: Approved ban on single-use plastic products - XXII Government - Portuguese Republic (portugal.gov.pt)), which obliges its member states to prevent and phase out single-use plastic.

These prohibitive measures prevent thousands of more tons of plastic from entering the waste stream every year, and when it comes to waste that lasts forever, every ton that is avoided matters.

The ban on disposable plastic does not only reduces its consumption and use, it also reduces its production, one of the main factors responsible for climate change. In addition to these impacts, there are also social and cultural impacts that come from banning plastic. Companies are forced to innovate and rethink their projects, through the purchase and production of sustainable materials. These new products help to change consumer mindsets and recognize that waste and disposal are not sustainable.

Until good intentions and legislation are a reality, our individual choices – and the collective changes that lead to them – are felt quickly and with an almost immediate impact on the environment. Acts as simple as buying a reusable water bottle can save the environment of hundreds of plastic bottles a year. Using a reusable bag for your purchases or questioning services that offer you plastic for an alternative are very important initiatives to eradicate single-use plastic from your life and protect our planet from the impacts of plastic waste.

The Story of Plastic: How Plastic has Changed the World (virtuebrush.com)